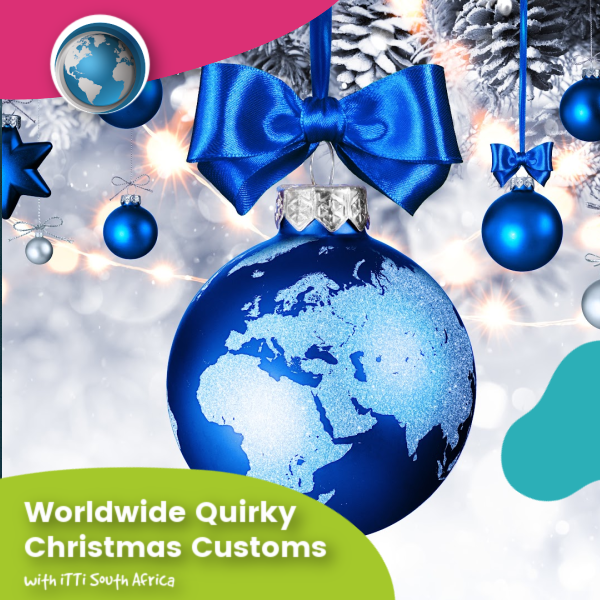 It’s that holy, jolly time of year where carols blare through crowded malls, masked shoppers squirrel about in search of deals a dozen, and people embrace either their inner angel or grinch as they gather with loved ones around tinsel-topped trees and share carefully prepared meals. That’s the Hollywood version anyway.

Our wonderful world is made up of people aplenty whose quirky Christmas customs get us eager to explore and embrace. Check out the following six countries’ traditions, and see if any can be added to your festive fun.

December 5th is deemed a special day in The Netherlands when children leave their shoes stuffed with hay and carrots by the fireplace and sing songs in anticipation for red-robed Sineterklaas (St. Nicholas) to bring them gifts during the night. According to Dutch tradition, Sinterklaas hails from Spain with his sidekicks – the Piets – who keep a record of children’s deeds. Obedient girls and boys receive sweets and small presents, while naughty kiddies will be carted off to Spain in a sack for a year to learn how to behave. Yikes!

In 1974, KFC launched an advertising campaign called Kurisumasu ni wa Kentakkii (Kentucky for Christmas), and ever since, each Christmas Japanese households treat themselves to a barrel or two of those crispy chicken morsels we all love. While it may appear to be a successful commercial ploy, this tradition has become symbolic of family reunion during a busy period.

In Caracas, Venezuela’s capital, roads are closed for locals to attend early morning church services from the 16th-24th of December on rollerskates! On Christmas Eve, San Nicolás (St. Nicholas) and Niño Jesús’ (Baby Jesus) bring gifts for all to open. Homes are decorated with Nacimiento (Nativity scenes), Aguinaldos y Parrandas (Christmas carols) are played in the background, and a traditional feast of tamales and Pernil Asado (roast pork) is devoured and washed down with Ponche de Crema (rum flavoured Venezuelan eggnog).

Christmas in Russia is celebrated on the 7th of January due to the Russian Orthodox Church that follows the Julian calendar for religious celebration days. On New Year’s Eve, tall and thin Ded Moroz or Father Frost together with his snow maiden Snegurochka place gifts for children under the New Year tree. Over this holiday season, some people participate in the Nativity Fast, where they fast until the appearance of the first star in the sky on Christmas Eve. The fast is broken with a feast of kutya (a mixture of honey, seeds and grains). It’s tradition to toss a spoonful up at the ceiling, and if it sticks, you’re in for a year of good luck!

Each Christmas Eve, the French enjoy their biggest holiday meal called le Réveillon (meaning ‘waking’), feasting for hours until a midnight church service. On the menu might be all the custom foods from oysters and stuffed turkey to a whopping 13 desserts which symbolise the Last Supper! It’s also a tradition that when setting the table for this meal that the ends of the tablecloth be knotted so that the Devil can’t get under the table!

Due to Greenland’s northern position in the hemisphere, residents usually only have about four hours of daylight. So it’s custom to place an illuminated star in home and shop windows to add light amid the immense dark. On Christmas night, men serve the women, and following the Christmas dinner, games are enjoyed by all. And if you find yourself in Spraglebugten near the town of Uummannaq, be on the lookout for Santa as he’s claimed to reside there!

Eager to celebrate Christmas in a land far far away? Having an internationally accredited TESOL certificate from iTTi South Africa will grant you the opportunity to travel the globe, whether as a teacher abroad or a travelling teacher online.

Transitioning from the in-class to online TEFL Classroom

Teach English in the People’s Republic of China