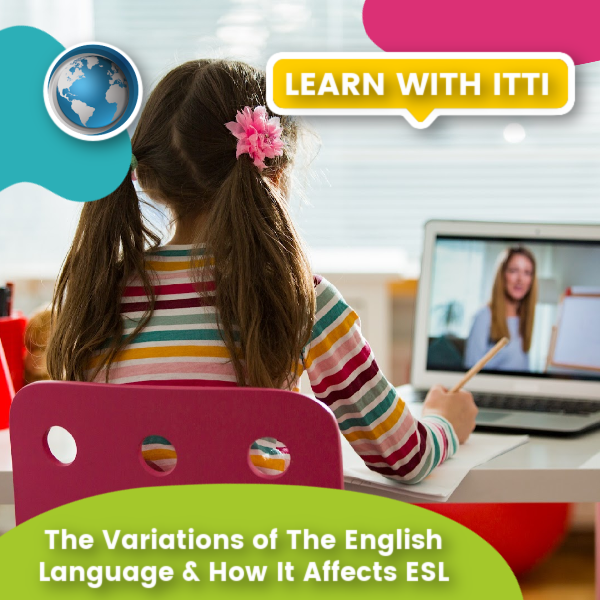 You’ve quickly realised as a TEFL teacher, just how tricky it is to teach English as a second or foreign language. There are English theory terms as a native English speaker you’ve never learnt formally, like conditionals, and as a non-native proficient English speaker, it’s overwhelming when new words are officially added each year to the Oxford English Dictionary [https://www.oed.com/], making English a constantly evolving, and confusing, language to teach.

English is considered difficult to learn due to its complicated grammatical structures, tangled tense, illogical idioms, absurd contradictions, puzzling pronunciation, and all the arbitrary exceptions to rules you’ve already learned.

If that’s not complex enough, there’s also the following prominent variations of the English language:

And, of course, each English variety has various dialects and accents, resulting in a conglomerate of English spoken worldwide, each claiming to be the correct standard.

Which English is Best?

All of them! The beauty of this language is its adaptations to local languages. Whichever variety of English you speak is correct for the country and surroundings you’re residing in. We can only but celebrate the variations and the humour it provides when comparing them.

First, English varieties affect your TEFL job interviews, particularly for online English teaching companies. Prior to interviews, investigate which English variety is preferred and taught at the company or school. For example, if the country or company favours American English pronunciation, you’ll have to practice modifying your accent to match the expectation. Use the Cambridge Dictionary [https://dictionary.cambridge.org/] audio functions to practice pronouncing common English words like water [https://dictionary.cambridge.org/dictionary/english/water] and mirror [https://dictionary.cambridge.org/pronunciation/english/mirror] in both dialects. Additionally, if you have a particularly strong regional accent, practice a clear, more neutral English accent by checking out YouTube videos like this one [https://www.youtube.com/watch?v=ChZJ1Q3GSuI] on connecting words like a native speaker or this clear pronunciation video [https://www.youtube.com/watch?v=n4NVPg2kHv4].

Then, when it’s time to teach your students, again identify the school’s preferred English variety. As the ESL/EFL teacher, less focus should be on your accent and more on teaching consistent English rules regarding spelling, pronunciation and vocabulary. Invest in or have bookmarked on the Internet the Oxford [https://www.oed.com/] and Merriam-Webster [https://www.merriam-webster.com/] dictionaries that you can consult if you get stuck with spelling or pronunciation.

It further affects the international standardised language proficiency tests IELTS [https://www.ielts.org/]  and TOEFL [https://www.ets.org/toefl] for migration, study or work. The IELTS test accepts either British or American English spelling, whereas TOEFL requires American English. However, the Hindu E-Paper [https://www.thehindu.com/features/education/Accent-is-not-a-criteria-for-disqualification-says-TOEFL-specialist/article16116324.ece#] reports that non-American English is acceptable to use in TOEFL as long as the English is consistent and “…the evaluator can understand what the test-taker is trying to convey …the British or Indian accent will not be a criterion for disqualification.”

In conclusion, don’t let these varieties and dialects shy you away from English teaching as a second or foreign language. It’s one of the most rewarding careers as you become an important part of another person’s language progression, ultimately helping them to take a step forward to realising their goals and dreams.

Let’s get you TESOL qualified with one of our online TEFL courses to take the next step on your English teaching journey! Contact us for registration ASAP!

Can I Work for More Than One Online English Teaching Company?

Will Training be Provided For Online Teaching?